Recently I came across a blog decrying the death of the Church, identifying “the serious problem in the Christian church today of what many call ‘cheap grace.’… the popular idea among Christians of downplaying the seriousness of sin and its consequences in the name of not offending the unbeliever.”

Apparently (according to the blogger) this “serious problem” is actually “killing the church”! 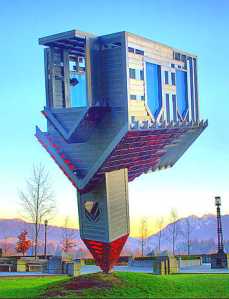 Sculpture entitled “Device to Root Out Evil” in Vancouver, Canada

Not to put too fine of a point on this, I immediately think two thoughts:

(1) The “Church” deserves to be killed — any effort expended on “saving it” is not only wasted effort, but detrimental to the true spiritual growth of the Body of Christ.

What people overwhelmingly call “the Church” doesn’t come from Jesus and he didn’t “build” it. What Jesus started wasn’t an organization headed up by bishops and priests, pastors and theologians, and what Jesus started never built any buildings, owned property, printed Sunday bulletins, administered ritualistic “sacraments”, or even held rallies, lobbied politicians to try and to control legislation, or passed the plate on Sundays (or on Saturdays.) And Jesus’ “Church” (which never existed anyway) didn’t fight over whether a woman could be the “church pastor” since there weren’t any “church pastors” like those we’re familiar with today and the concept of “spiritual authority” of religious professionals exerting control over the lives (and minds) of Believers came from the carnal society of the Roman Empire and certainly not from either the Spirit or the Word.

What Jesus actually started was called (in Greek, which they used in his day) the ekklesia. He promised, “I will build My ekklesia and the gates of Hell won’t be able to prevail against it!” (Not even “cheap grace” can prevail against that which Jesus builds!) And then the rest of the New Testament describes this “ekklesia” as a “gathering together” of people who are spiritually made into one Person — Jesus Himself. The ekklesia is a living “organism” and not an “organization”. Every single person throughout the world and throughout the centuries who has met the Living God and trusted that He’ll save them from sin and death is immediately incorporated into this spiritual organism that surpasses all geography, all races and nationalities, all political persuasions, and all ages.

What people think of today when they hear the word “Church” is not what Jesus “built” (and is still “building” today.) And the organization that is masquerading as Jesus’ “Church” deserves to be killed — not the real Body of Christ, not the real ekklesia, not the real spiritual “organism”, but the Great Pretender. If not killed off, at least it needs to be exposed for what it is — and especially what it isn’t.

(2) And if anything is “killing the Church”, it’s the people who go to “Church”. Hypocrisy, naming the Name of Christ but demonstrating a selfish religiosity, cultivating a focus of other people’s immorality rather than on one’s own misbehavior, displaying an arrogant belief in one’s own superiority over those who aren’t churched, turning a financial profit from people who are truly hungry spiritually but are force-fed religion instead… These are the kinds of things killing “the Church” in America and Europe today and it’s “Christians” who are doing it to themselves.

This isn’t just a rant but is precisely the conclusion the apostle Paul came to 2,000 years ago. In his letter to the Believers in Rome [Rom 2.22ff], Paul accused the religious people of the same thing. In contemporary terms, here’s what he said:

You’re so ready to instruct others about God and how they’re such sinners, do you ever teach yourself anything? You preach against stealing, for example, but are you sure of your own honesty? You denounce the practice of adultery, but are you sure of your own purity? You accuse others of following false “gods”, but how many of you make money your god instead? Everyone knows how proud you are of “living a Christian lifestyle”, but the more you boast about it, the more God is dishonored when other people can see that you don’t actually live it! Don’t you know that (according to the Prophet Isaiah) “the very name of God is cursed among unbelievers because of your own behavior!”?

When it comes to drawing “moderns” into the Body of Christ, all the dogma and theology, and the threats of hellfire and brimstone or the promises of pie-in-the-sky “Heaven” are worthless in bringing people into a repentant frame of mind. As the apostle Paul says [Rom 2.4], “Do you have contempt for God Who is very kind to you, puts up with you, and deals patiently with you? Don’t you realize that it’s the kindness of God that leads people to Him and changes the way they think and act?”

And earlier, Jesus told his disciples that the way the world would recognize that he was truly the Savior sent from God was by their love for one another.

Kindness and love are the tools of Jesus Christ, the chief Evangelist — not playing up “the seriousness of sin and its consequences” to make people so fearful and miserable that they’ll subject themselves to some preacher’s religious system and call it “Church”.

And one last point: Kindness and love will not — can not — draw people into phony religious organizations which practice control over their lives and frequently empty as much from their pockets in the process as they’re able. Kindness and love edifies and builds up those who earnestly seek and trust in God, and never brings regulation but freedom.
EmDog

Tweety, Facebook, MeSpace and all these kinds of websites are called "social networking". I'm more interested in putting pressure against our social status quo — I think there's more to change than there is to protect. So let's network UNsocially.

.
It's kinda like the Japanese Mu-kyokai (Non-church). There was so much superficial imitation of Western "Christianity" amongst the Japanese, many of them started meeting together at a "Not-church", making the point that though they were serious about their religious faith and spiritual lives, they were SO serious they didn't want to be mistaken for run-of-the-mill, status quo religious game-players.

.
In that sense, instead of "unsocial networking", I could have called this site, "Mu-social Networking" or "not-social", just to make a similar point that we need to STOP perpetuating superficial relationship amongst ourselves. And so -- brothers and sisters of the Cause -- let's band together in this new mu-society... (Really -- that's as complicated as it gets.)

At home near the Trinity Alps in northern California.