Most church people who glance at this first sentence will read, “Kierkegaard?” and stop reading. (!)

But here’s a teaser: Kierkegaard (a dead Danish) preached and wrote that whoever loves God must dissolve their active participation in the “Church Machine”.  He referred to the church of his day, but we’ll consider whether it rightfully applies as well to our “Church Machines” of today as well.

Anarchy is the condition of a society, a group of people, or even a single individual which does not recognize authority; it’s considered a social movement when taken to the full extent of abolishing government at large.

Them’s fighten’ words… either fighting for or against a government or group — or of a single individual against some sort of over-bearing machine.

Kierkegaard lived in the first part of the 1800’s in Denmark and has the dubious distinction of being “claimed” or rejected by nearly every major group since then from Darwin, to Karl Barth (20th cent neo-conservative theologians), to Albert Camus (Algerian Communist), to the atheist Jean-Paul Sartre (who gave up on the idea that an individual could have any realistic effect against a “church machine’, “political machine” or anything worth living and dying for), and Martin Buber (survivor of the Nazi pogrom to destroy all the Jews — Kierkegaard’s ideas helped him survive the death camps.)

What a lot of contradictory influence Kierkegaard has had! But I’m interested in a side of Kierkegaard that people still argue about and most refuse to accept — that is Søren Kierkegaard as spiritual anarchist.

It’s well to listen to someone this influential, especially when he has a word to say about the “Church Machine”.

In Kierkegaard’s day (early 1800’s), Denmark’s government owned and ran “the Church”. For years, Kierkegaard tried to find evidence that the official Church demonstrated any aspect of Jesus Christ’s life or love.

He never found any connection between the government-run church and, say, a government-run retirement home or waste-disposal service. Except the Church was a lot busier with apparently unbiblical activities and practices having nothing to do with an individual’s trust and confidence in Jesus Christ.

Think about your own life for a moment: what happens if you lose your son or daughter? What do you do? How does your church help take you through that dark valley and out the other side into joy? Or what do you do when you’ve seen the industry that’s given you bread and butter and a house over you’re your head for decades suddenly goes under? With you having no other employment opportunity? How does the Church comfort you?

In his day, Kierkegaard watched people go through extreme hardship — and though thse were faithful (tithing — taxed, same thing) members of the church, he could see no way in which the Church could or did help them.

Furthermore, the Scriptures he studied showed that the Church had the very Means (in Christ) to minister successfully to even the most devastating of experiences. Seeing the Treasure encompassed by the Church and yet seeing it choose to ignore the Treasure it held — began to work in him to the point of anarchy against the socio-political “machine” of the Church. “Come,” said the Church, “Pray for the forgiveness of your sins (even though they will still be held against you!!!) Put in your coin and draw forth nothing but increased condemnation!”

In breaking with the Danish Church, one thing Kierkegaard decided was that when one sought forgiveness for sin, those sins were no longer held against them. He wrote a prayer to his “Father in Heaven” to not hold our sins against us, but to hold us up against our sins, that in so doing God would be reminded of what He did in forgiving us our sins, not how we’ve failed and sinned against Him. (Quite revolutionary against official church doctrine!) 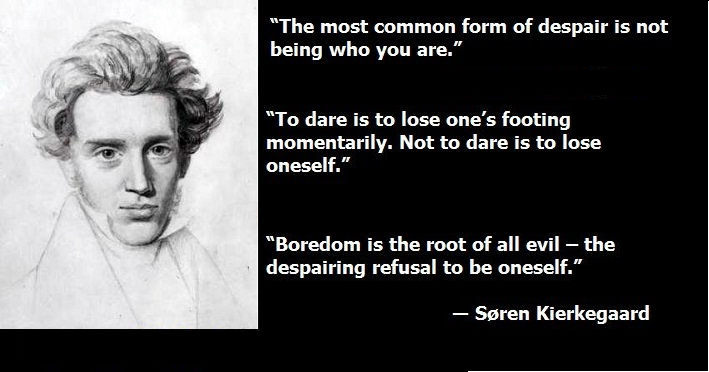 Kierkegaard also decided (in his increasing rebellion against the official Church) that he wanted “to lead a completely human life” and not one of merely abstract, religious knowledge — and above all, he wanted to preach a Christianity that worked and not one that was merely illusion.

All in all, Kierkegaard didn’t advocate for individuals to either love or hate the ineffectual, religious culture of his day — but he vehemently argued against the indifference of individuals to the call to live a truly Christian life.

Since the “Church machine” encouraged people to ignore this call to live a truly Christian life, this brought Kierkegaard to dissolve his on  semi-active relationship to the “Church machine”. Here, finally, is one way which we can glimpse Søren Kierkegaard as an anarchist: “a single individual who no longer recognizes authority.”

Here, too, is the heart of why I’m writing this particular blog: Sure, people who are already members of a particular church have a bias toward protecting that church and its functions; if someone loses a child, there’s a built-in support-group to come around and offer comfort and help. And there’s a propensity to declare that such support is “helpful”.

But what happens when the parent losing a child is living on the street? Never has attended that church (or any other for that matter.) Do any of the members of that group come out to find that homeless mother, and offer something — something that is so Christ that what’s offered in His Name is actually effectual? Or are the prayers, the bag of groceries, the night in Willow Creek’s cheapest motel simply an illusion of divine help? Is such a mockery of the words of Jesus on the winding, cliff road up to Nain who said to the funeral procession, “Arise!” and the boy arose and ministered again to his mother?

How much illusion passes in the name of Churchdom? The official Church? And how about the people in that Church machine? Did they come streaming out to seek the need of the childless mother, or did they hope “someone else” would do it? (“Don’t we have elders?”)

I can’t say any phase of the “Church Machine” I ever “pastored” ever once met Kierkegaard’s challenge of pursuing with our whole hearts the Call to life a truly Christ-like life. I can’t say that in the guise of the Church Machine, we ever moved past the illusion of divine help to the Reality of divine help.

In fact, I have every reason to submit to Kierkegaard’s argument that (as part of the Church Machine) I’ve been found to be indifferent — indifferent to the High Calling I have in being a “follower” of Jesus Christ.

But there’s another indifference — the indifference that Jesus showed in His own orientation toward the socio-political structures of his own time! Elsewhere, this indifference appears throughout the centuries of Christian tradition and is here considered a more radical standpoint even than “hatred of the culture” or of “society” — Kierkegaard watched a binding, a bonding together between church and the socio-political powers — a unity that he saw plaguing his beloved Denmark and making authentic Christianity even more scarce.

The binding together of the Machines of politics and Churchianity risked swallowing the individual into the collective. Kierkegaard opposed the socio-political “machine” through many satirical writings replete with explanations, stories, parables, &c. emphasizing the individual as a disciple of Jesus Christ and not a disciple of the socio-political Machine.

According to Kierkegaard’s thought, the depth and intensity of this love of God involves more than merely faithful “church attendance” but further than that, a dissolution of an active relationship of the “machine” — the social “indifference” such as Jesus displayed in His day and time. Jesus was not iconoclastic to the Pharisitical/Priestly Judaism of His day — He was simply indifferent to it. And so is Kierkegaard’s call over the last two centuries for followers of Christ: indifference.

Understood as such, Kierkegaard’s indifference to the traditional church and the socio-political machine which supports it is anarchist. Described in this way, Kierkegaard’s challenge to those still involved in the “Church Machine” is a call into (1) a unity with God and not political machines (2) a repentance from an indifferent attitude from following Jesus Christ; and (3) a dissolution from an active relationship within the Church Machine.

All anarchists we: Jesus, Kierkegaard, and we.

Tweety, Facebook, MeSpace and all these kinds of websites are called "social networking". I'm more interested in putting pressure against our social status quo — I think there's more to change than there is to protect. So let's network UNsocially.

.
It's kinda like the Japanese Mu-kyokai (Non-church). There was so much superficial imitation of Western "Christianity" amongst the Japanese, many of them started meeting together at a "Not-church", making the point that though they were serious about their religious faith and spiritual lives, they were SO serious they didn't want to be mistaken for run-of-the-mill, status quo religious game-players.

.
In that sense, instead of "unsocial networking", I could have called this site, "Mu-social Networking" or "not-social", just to make a similar point that we need to STOP perpetuating superficial relationship amongst ourselves. And so -- brothers and sisters of the Cause -- let's band together in this new mu-society... (Really -- that's as complicated as it gets.)

At home near the Trinity Alps in northern California.